Where is the first city in Taiwan？It is not Taipei, it’s Tainan！Tainan is located in the south central part of Taiwan，With 1.9 million population, It is the 4th big city after Taipei¸ Kaohsiung and Taichung .Tainan was the core of international trade in the past, now benefited with well-developed traditional handicraft, agriculture, salt pan

Tainan has a lot rich men due to generation after generation of successive prosperity.Tainan city is established at nearly the end of Qing Dynasty.There are abundant traces of historical attractions, it is a city full of charm.

Now I would like to introduce how to reach  Tainan from Taipei  and the methods of traveling to Tainan .

Of course, you can also take a train to go to Tainan, however, there will be quite a few stops along the road, hence it will take about 3 and half, or 4 hours to arrive at Tainan from Taipei.

There are also other means of transportation to reach Tainan from Taipei，Otherwise, it is also possible to start from the HSR southern-most end station Kaohsiung Zouying HSR station to take a north bound train to Tainan 。It only takes about 30 minutes to arrive Tainan from Zouying HSR station.All the platforms in Taipei Train Station are underground.But prent  note that the ticket gate of HSR and TRA Train are separated. 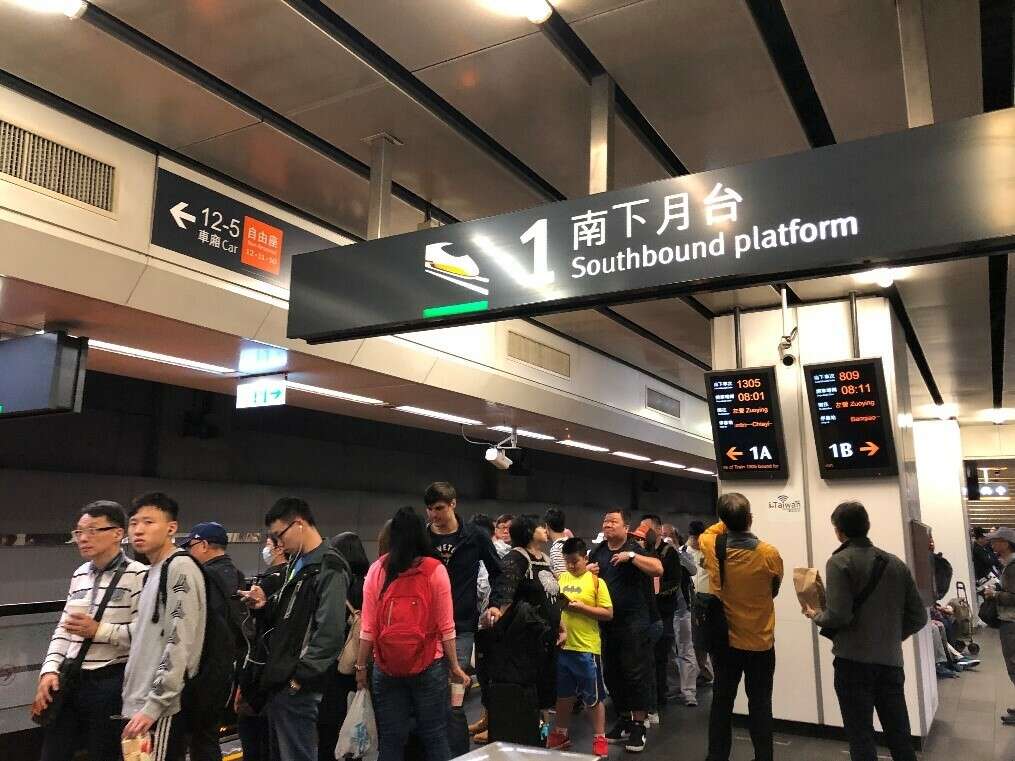 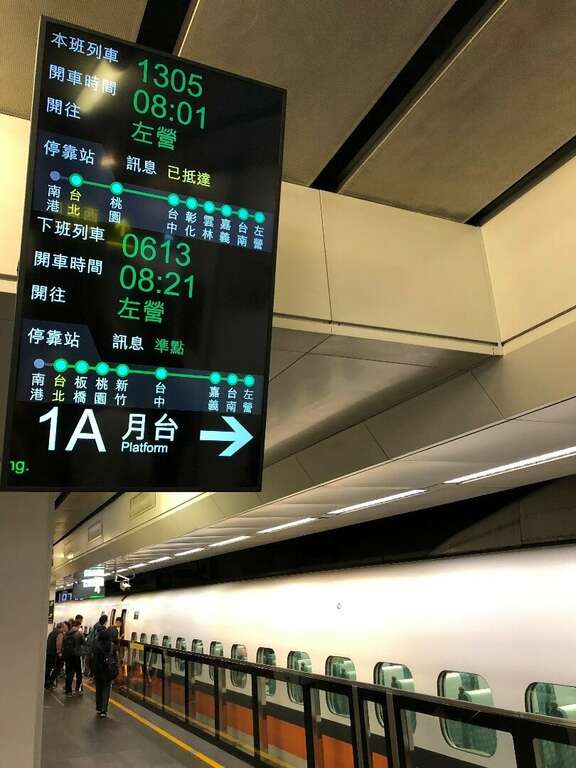 The south bound HSR train departing from Taipei
The space of HSR train is much wider and comfortable than KTX (Korea High Speed Rail) with the adjustable seat, it is very comfortable to ride on the HSR train. 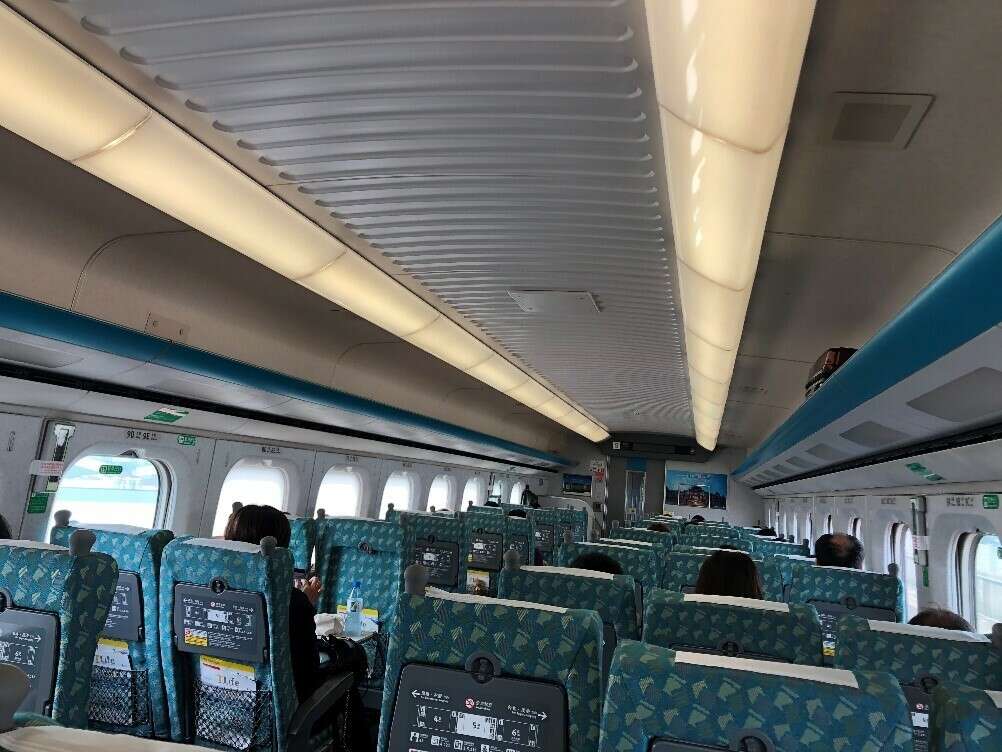 The interior of the Taiwan HSR train

Regretfully that there is not much food sold in the HSR train as you might imagine, therefore we suggest that you’d better buy some food or drinks before boarding the train.

After ride the escalator down to ground level, you can see a convenience store right in front of you. And the Visitors Center is located at the left-hand side of MOS Burger, that provide many travel guide pamphlets in Korean. 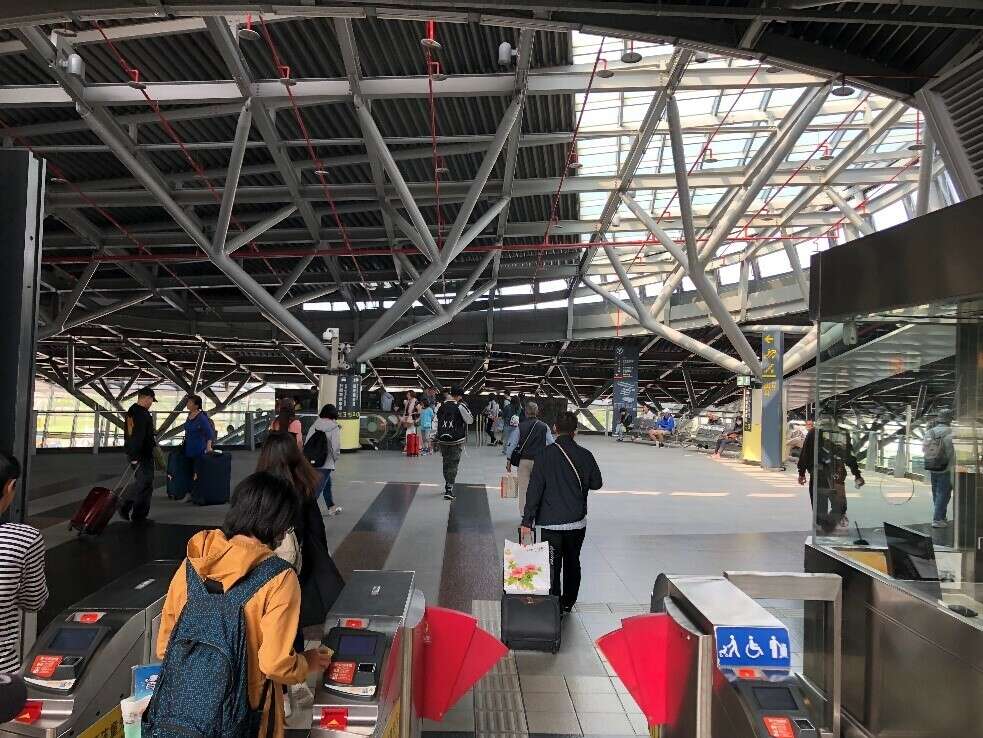 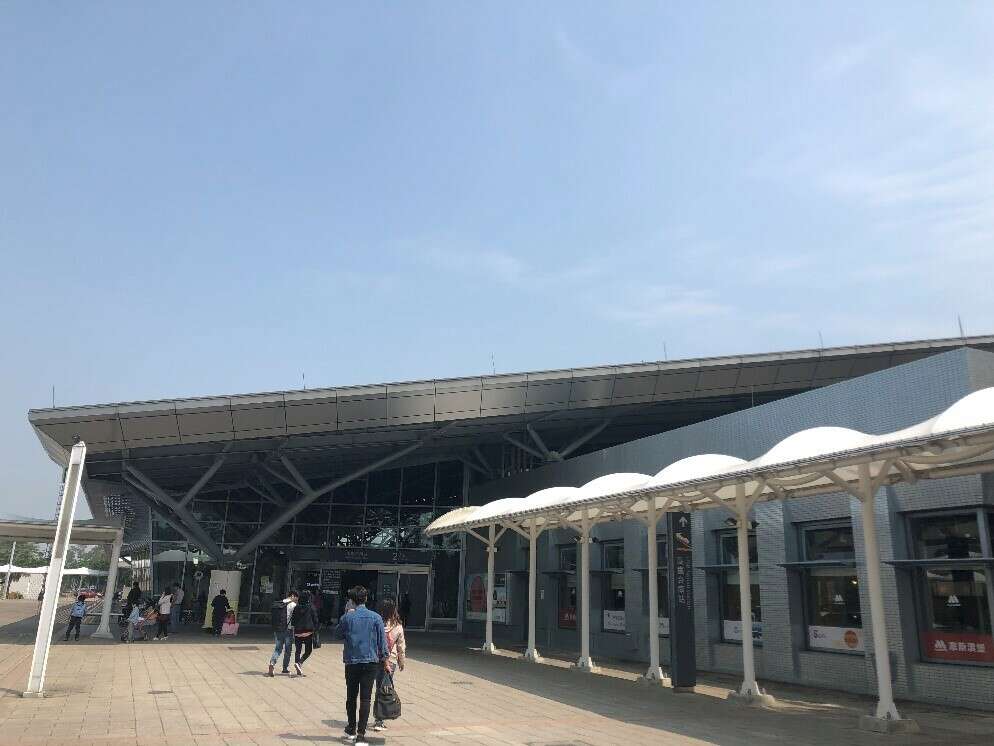 The interval of bus will be every 20-30 minutes, if the traffic is not too heavy, time to arrive downtown area of Tainan will be around 40-50 minutes. Hence, of course you have to remember to go to the toilet first before getting on the bus.

Better to confirm the location of your hotel in Tainan to be able to get off the bus at the nearest stop. I have asked the staff in the Visitors Center and he responded very kindly and specifically to me. 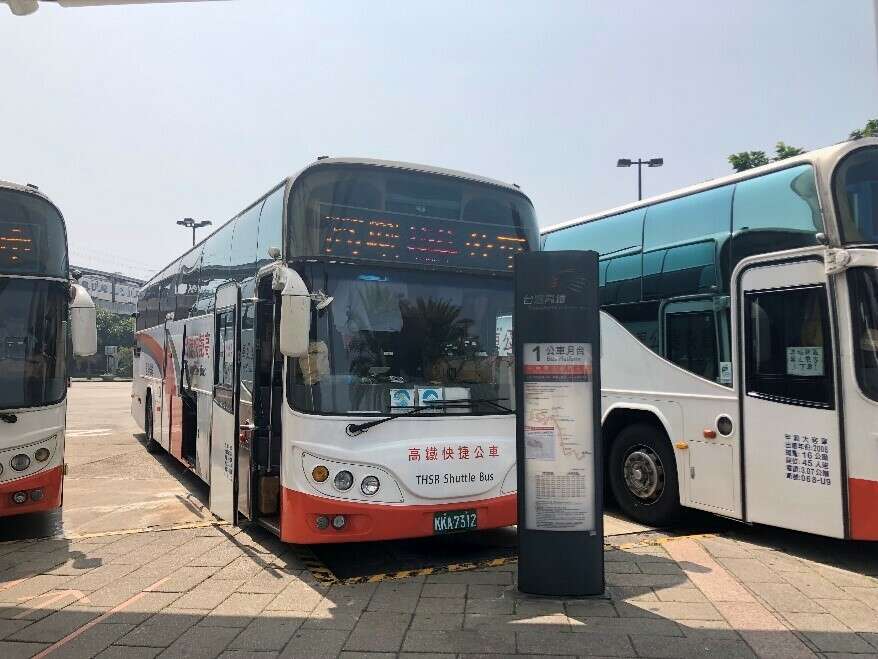 Although the bus route map may look like not far away, however, after the bus passed Chi Mei Museum it will be running on the freeway.

So, you can see that the distance to downtown area is not very near, but if you are in a hurry and have to take a taxi, prent  bear in mind that the taxi fare will not be cheap. 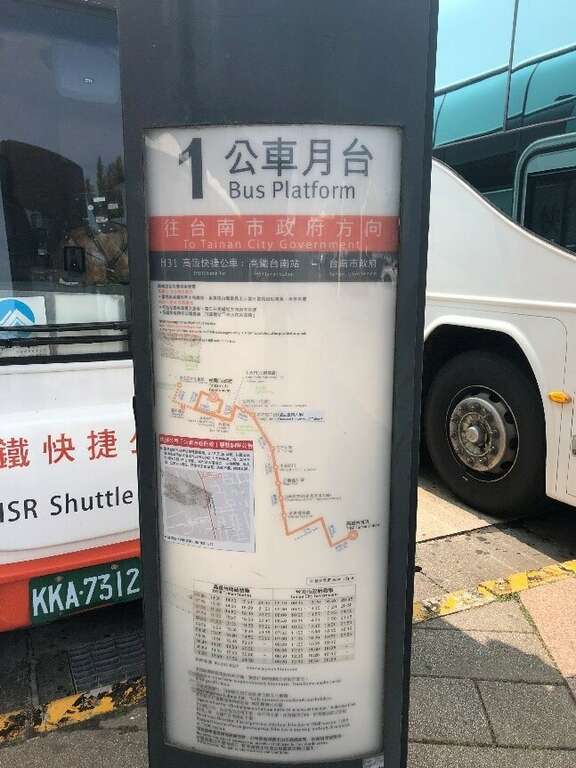 The route map to go to Tainan City Hall 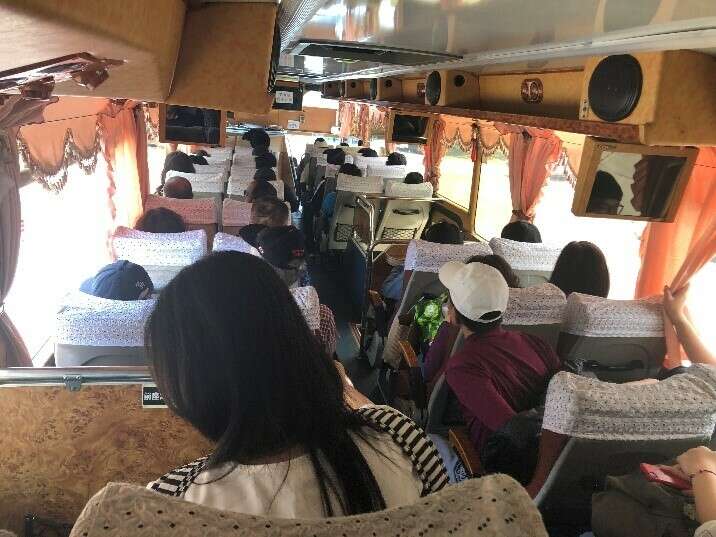 The interior of the free shuttle bus

It only cost 25NTD which is quite cheap. Though the interval of train arriving is not fixed, but the waiting time will be around every 20-30 minutes. 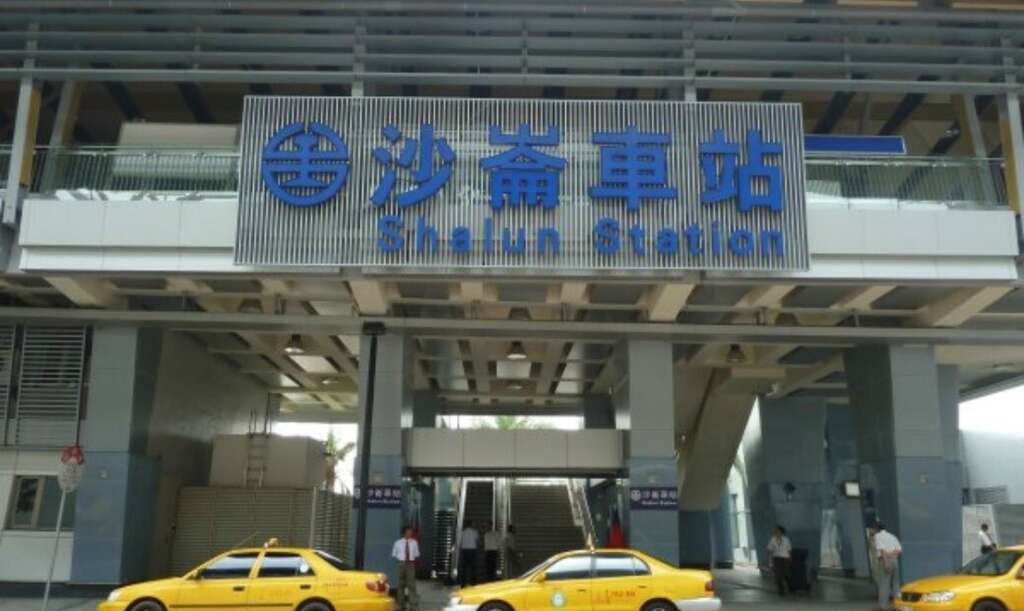 If you want to take the train, instead of coming from ticket gate Exit 2, prent  follow the guiding instruction (the bluish green line on the floor）to go to the TRA Train Station -Shalun Station。

It wouldn’t be inconvenient even if you are dragging a luggage. 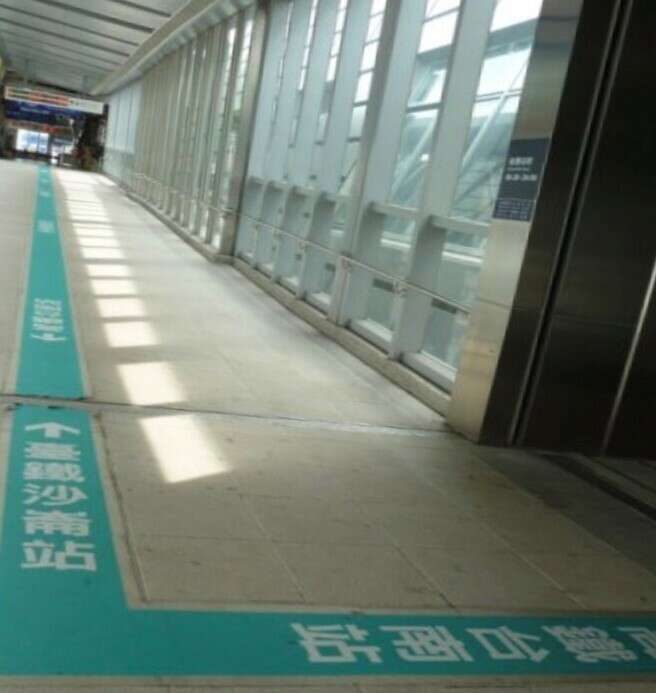 It takes about 40 minutes by train to reach downtown Tainan

If you need to get to Tainan HSR station from downtown area. 2.Tainan public T-Bike rental system 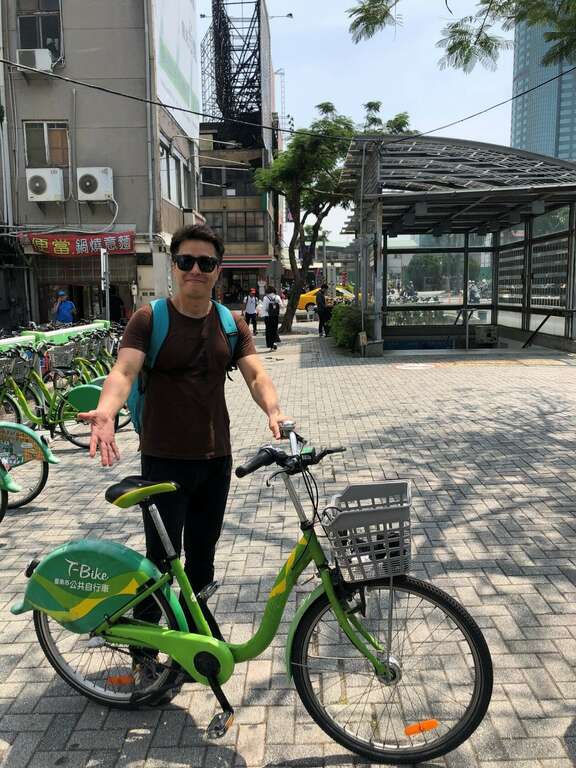 I would recommend every visitor use T-Bike to see this serene and old retro city of Tainan.

The whole area of Tainan is a flat and level aground, therefore it is extremely suitable to stroll around downtown area by bicycle to go anywhere you like. If you wish to rent the T-Bike, you have to register at the terminal of T-Bike stand with the Taiwanese transportation card (Easy Card or I-Pass), after completed the registration, the first 30 minutes will be free of charge. And if you want to return the T-Bike you simply return it at any T-Bike stand. The actual rental fare is 10 TWD every 30 minutes almost the same as bus ticket. 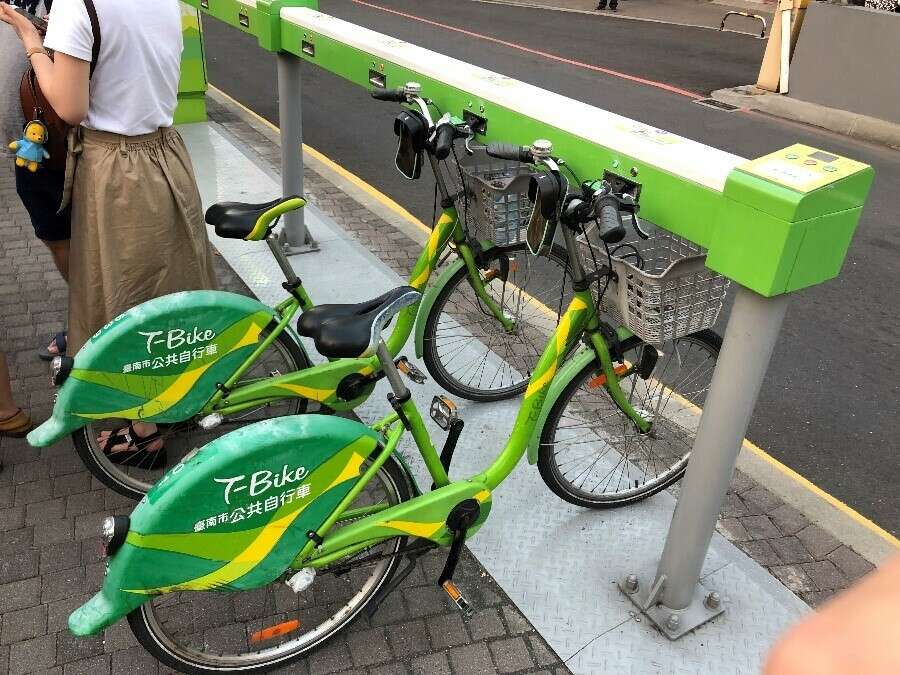 There are a lot of tourists around, maybe because today is the weekend.

In downtown Tainan, every time I saw a person riding the T-Bike like me,

I couldn’t help myself but wave and say hello to them joyfully. 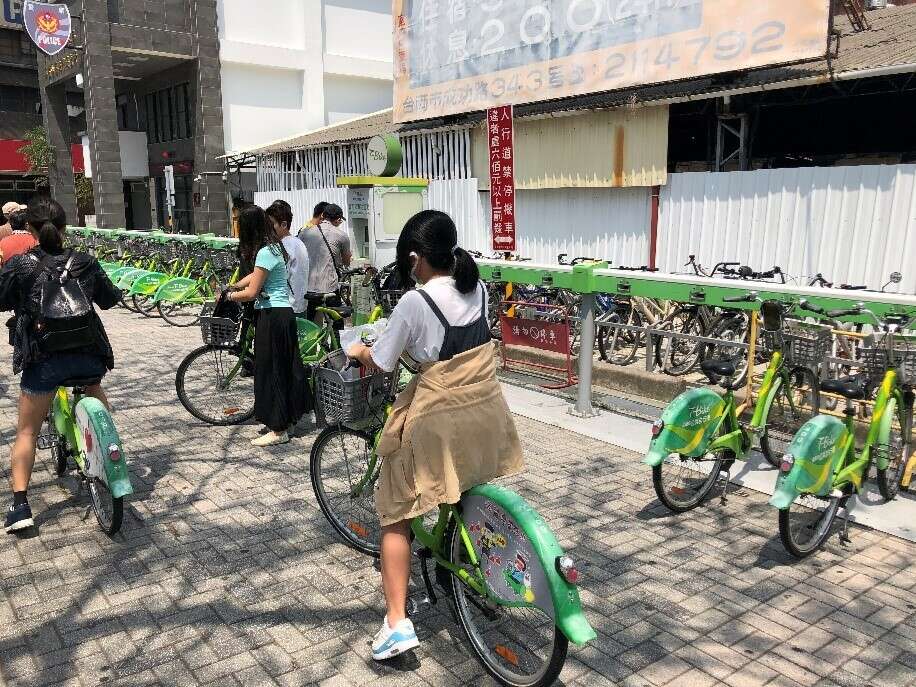 The T-Bike stand outside of Tainan Train Station

There is no backseat to take another person, it’s only for one person.

Because safety is the first thing we have in mind！ 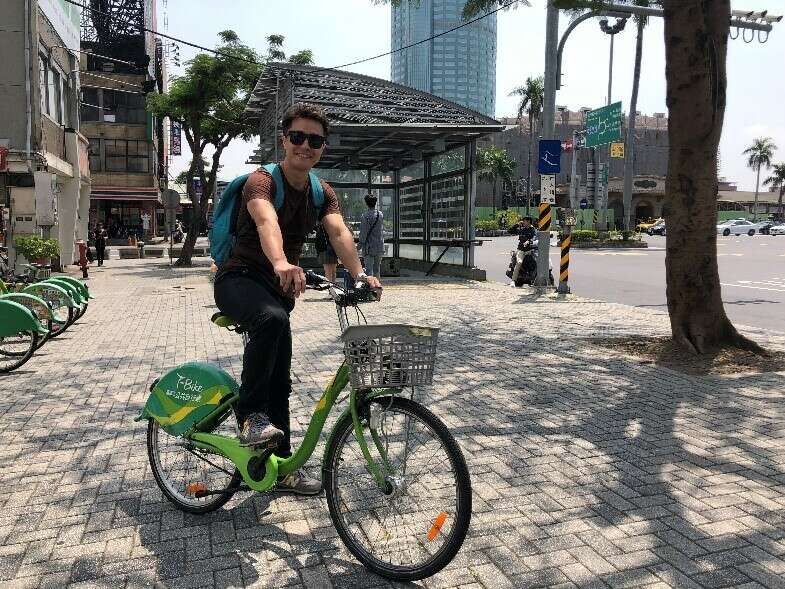 One bike for one person
(no backseat installed)

Don’t hesitate, just ask any locals around you, how to rent a T-Bike！Persons who constantly use T-Bike are around age 20-39, therefore basic English communication should be no problem！

At first, I did not know how to rent the T-Bike too, so I asked someone nearby, and he came to the help and told me how to operate the terminal.

I just handed out my transportation card and said ‘please ’，then he soon came to the rescue. It seems that the locals are all very kind to the tourists from other country or even from other places of Taiwan.

Every major city in many countries has tour bus for tourists

There are city tour buses in Seoul, Busan and Daegu, Korea. There is no exception for Tainan, if you take the Tainan city tour bus you can see all the major sightseeing attractions in the downtown area in a day, and not only the foreign tourists, but Taiwanese tourist will also use the tour bus for sightseeing too. 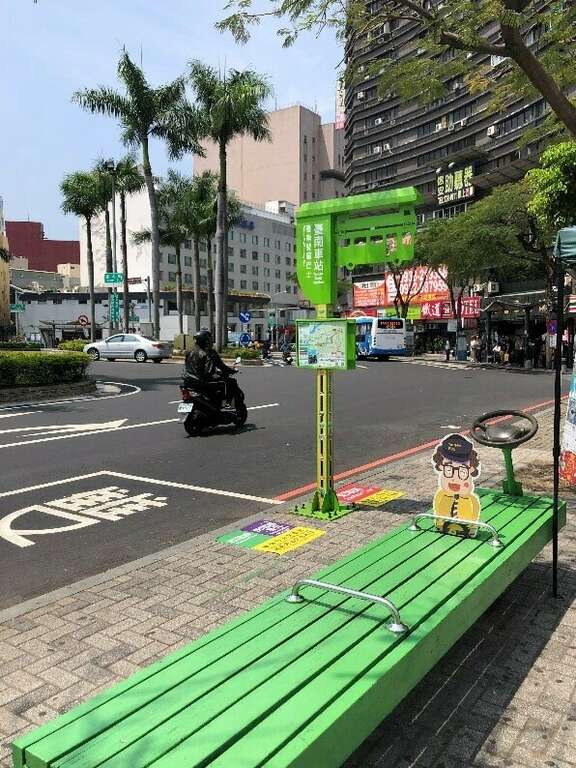 The bus stop for the Tainan downtown city tour

There are Western line（green）and Eastern Line（yellow）in the day time. And there is also a City night view line（purple）specially arranged for night owl tourist for night time tour in the downtown area. But if it is your first time to Tainan, I’d simply recommend to take the daytime western line bus. 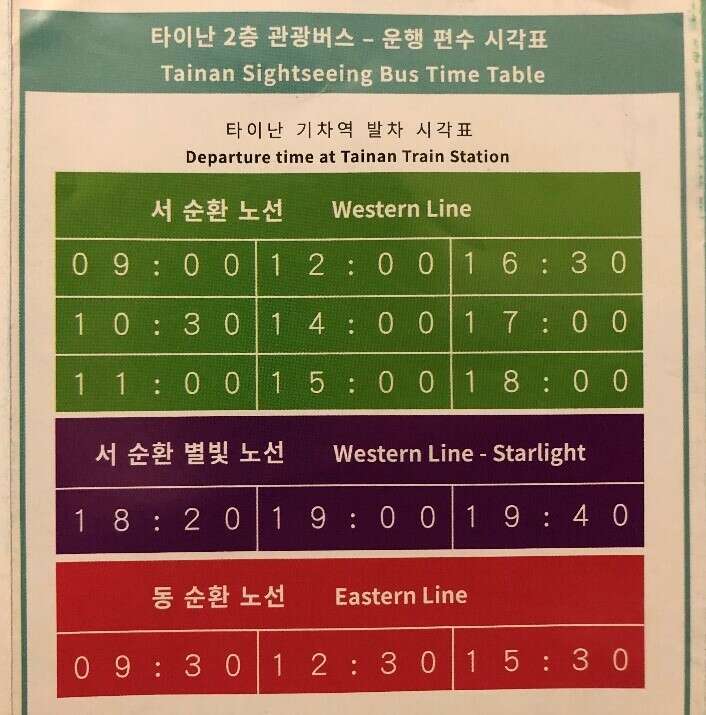 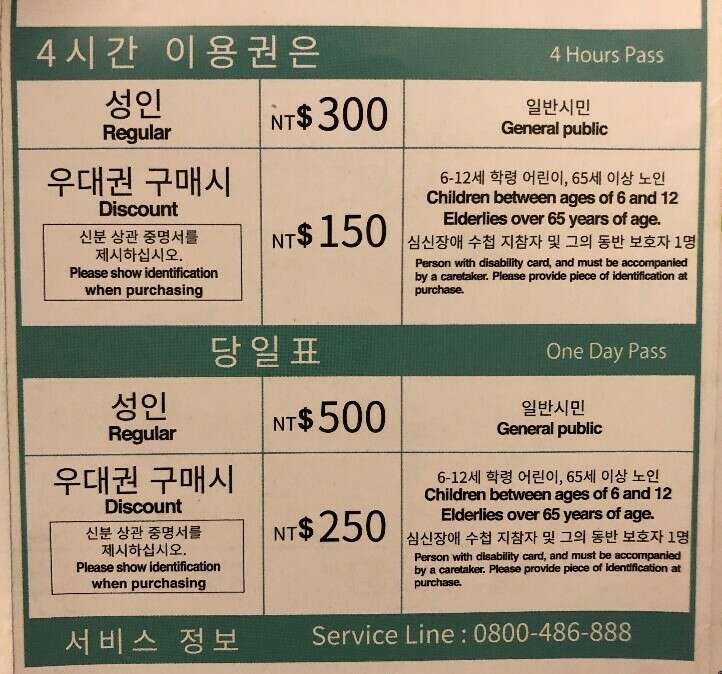 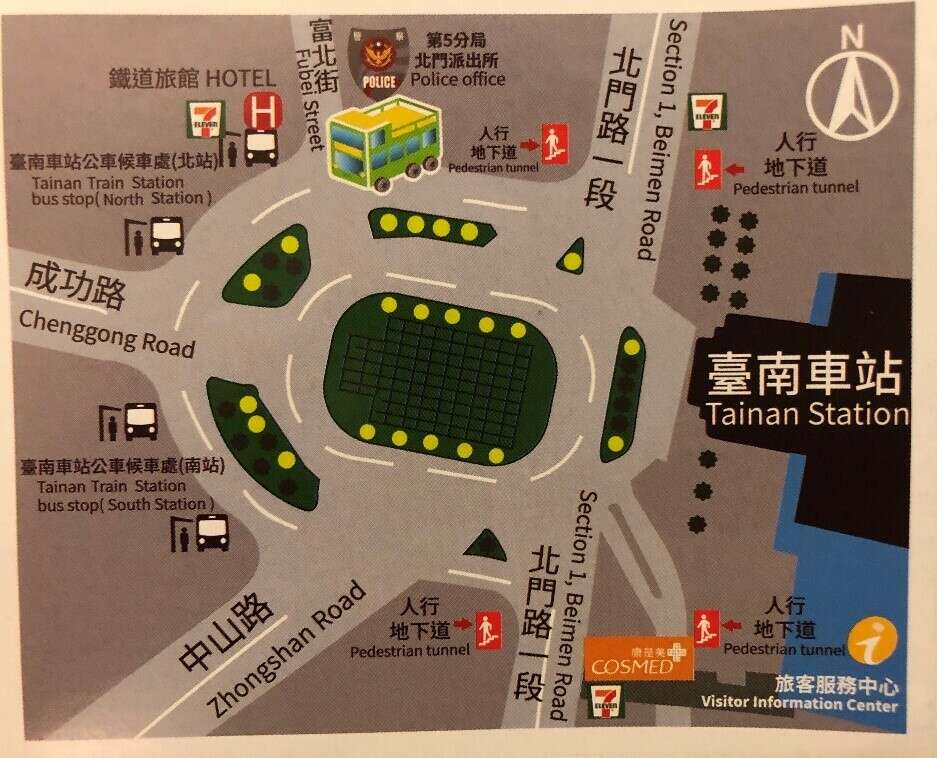 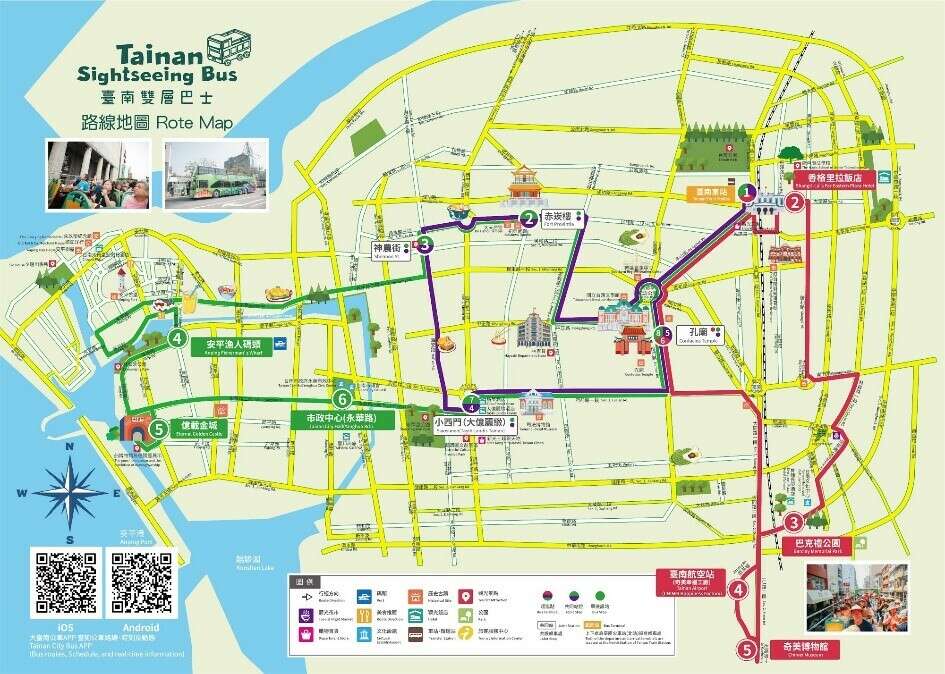 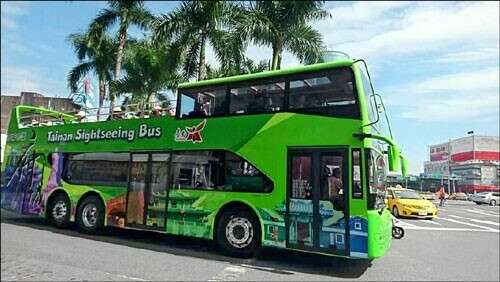 The appearance of the Tainan city tour bus 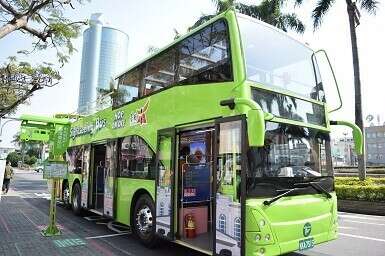