Actually, we would like to recommend Sen-Ger Soybean Milk shop in North Dist. but tourists has to pay for taxi fare again. However, if you would like to stay in downtown area in West Central Dist. there is a nice nameless breakfast shop near the Shuixian Temple Market that serves nice egg pan cake. Its roast pork egg pan cake and soybean milk are also must-have items! 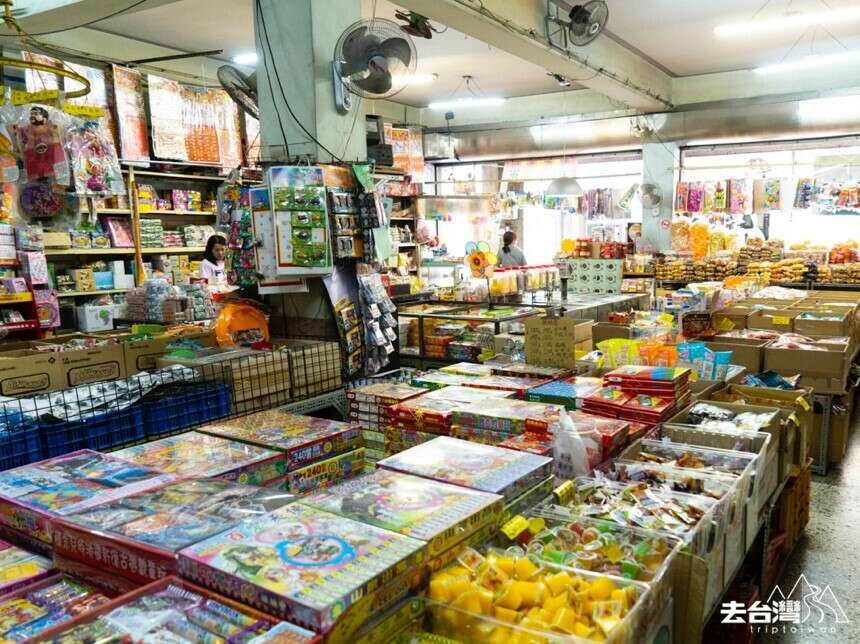 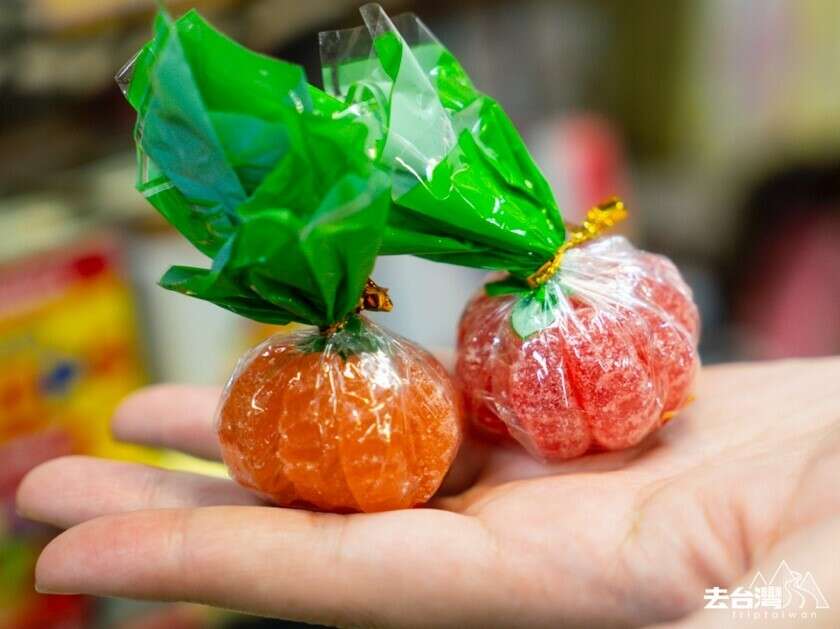 Caption: This type of candy also comes in banana-shaped, do you remember?

There are a lot of “Ganma Diam (grocery store) that are selling all varieties of staples, cooking oils etc. in Taiwan. However, there is not so many store of such scale that just sells candies and toys. The owner told us that there were around 30 more such stores like this one and they did not just sell chips, candies that can stay for long validities. Instead, those old stores were selling daily freshly made bread, brown sugar rice cake, eggy cake and preserved fruits, etc.  Therefore you can still see that there are packing materials left from the no-plastic wrapping era, each printed with manufacturer’s logos, which are provided for those customers who take a bus to come to buy the goods sold in the store. 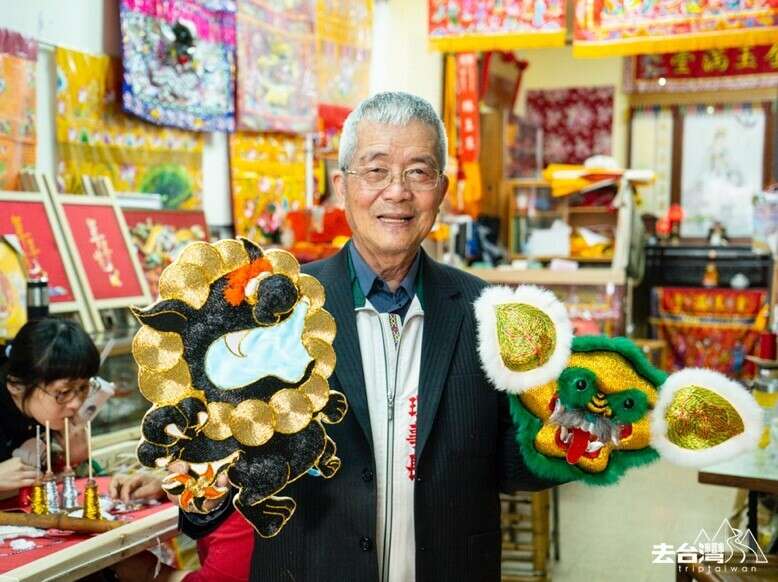 The reason why Master Lin Yu-Chuan has become a national treasure of Taiwan is not only due to his profound capability of embroidery, but also because of his work creations are more than just the traditional religious embroideries and had once been displayed on the stage of New York Fashion Show Week. There is a poster on the door saying that everybody is welcomed to visit and take a picture in the shop as they like, and the establisher of Tainan Castle City G-Colour Master Lin Yu-Chuan is a very kind, outgoing, eloquent person.

◤Tainan Castle City G-Colour◢
Transportation: Around a 8-minute walk and about a 5-minute drive from Jin-Shin Candy Store; about 5 minutes driving distance from Tainan Train Station.

Ⓠ Fu-Tai Dining, lunch for locals: a fish and a bowl of braised pork rice

Living in Tainan, in fact, we rarely eat street food on a daily basis, but there are so much varieties of food cultures in Tainan. Dining places are one of the good examples to experience what the locals are eating with reasonable price and good quality. In general, such places serve braised pork rice, fish soup and a few dozens of side dishes. Regular side dishes are fried sausage, with African carp, soy sauce braised fishes and luffa, stir fried pork and onion, braised bitter melon etc., whenever they are in season.  The pan-fried bean curd skin shrimp roll with a price of NT$30/ HK$7.5 served in the 80-year history Fu-Tai Dining is rarely seen in other similar places. 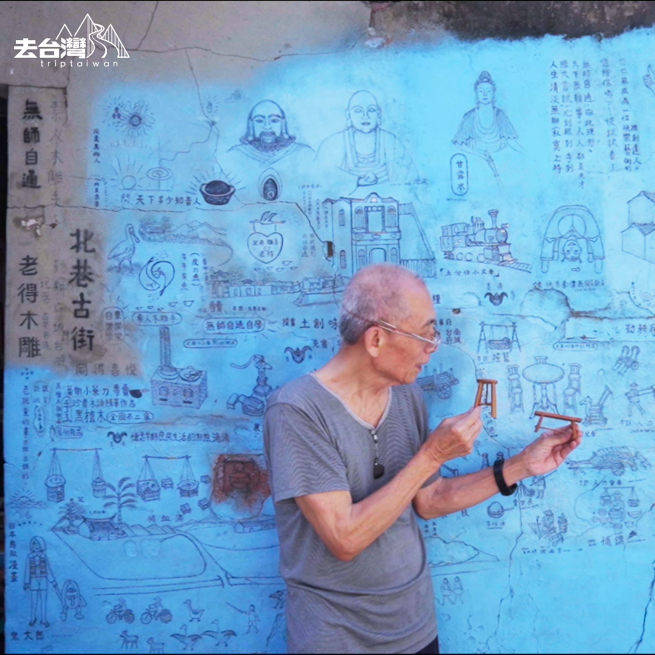 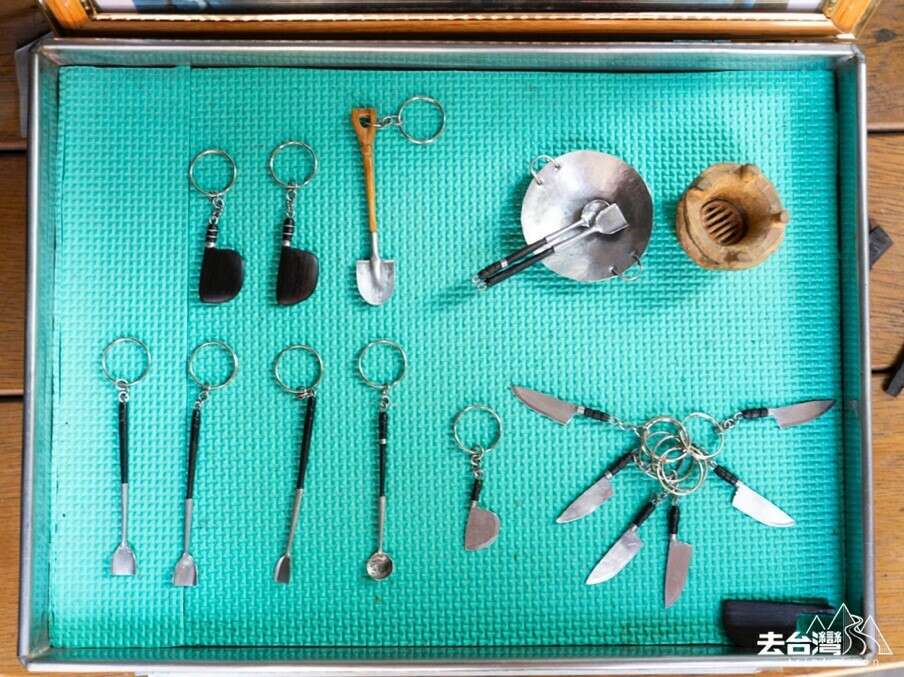 ⓇFinding Pop Rau-De in North Alley, whose carvings are even more miniaturized at age 79

Pop Rau De is an old pro in an alley who is a self-taught carving master after he retired at 62, with Presbyopia from old age his carving items became smaller and smaller. He can produce one or two handmade miniature kitchen knives from ebony, and he has sold more than 3,000 miniature kitchen knives in the past 3 years. At the age of 79, he can carve limited quantity of miniature tools that are mostly traditional kitchenware that you cannot find in any other places in Taiwan other than in this alley. 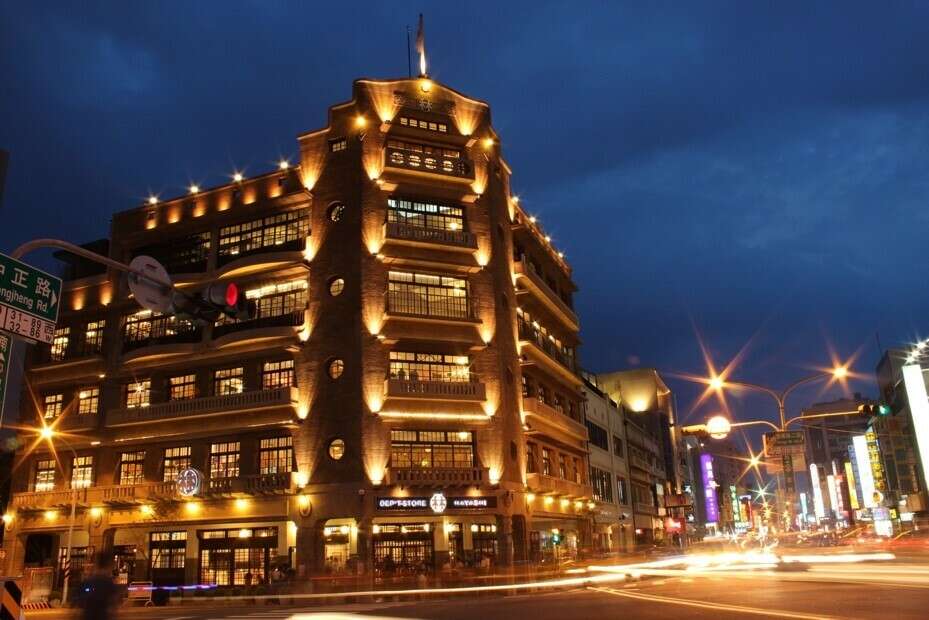 Ⓢ The aggregation centre of Taiwanese delicacies and souvenir are all here in the landmark of Tainan: Hayashi Department Store

Hayashi Department Store, located at the city centre is a must visit attraction for almost every tourist in these few years. Aside from being able to buy all kinds of fine Taiwanese delicacies, souvenir and cultural and creative products, the building itself was built and opened since 1932 as a Japanese invested department store that installed an elevator, which was a very rarity in that era. The old elevator is still kept in the top floor of the building, where you can enjoy the sunset through a Japanese Jinja (shrine) “Suehiro-Sha” on the roof of the building. From every restored tile, bricks, stairways, windows and the entire space, we can see that the building have been kept well with exactly the same old style of the 1930s, all of which are worth visiting. 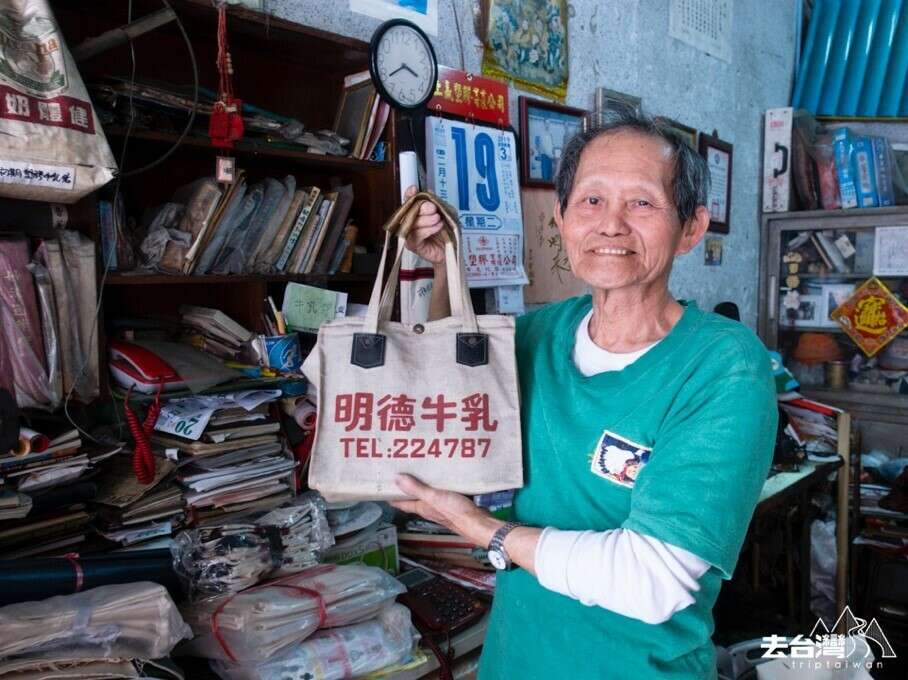 The canvas material was once used for military purposes. There are still a few shops in Tainan making a variety of old canvas products. Amazingly, we have found the canvas made school bag and hats after World War II in the obscure Ching-long Canvas Shop. In fact, we even found the small canvas bag used by Min-de Milk to deliver small bottles of milk every afternoon to each house. It is totally amazing that each shop is a small museum!  This shop still sells all kinds of shapes of canvas bags, and we requested a custom-made of tripod bag. However, since the small shop has taken lots of other orders, we are told that it will take one month to complete. 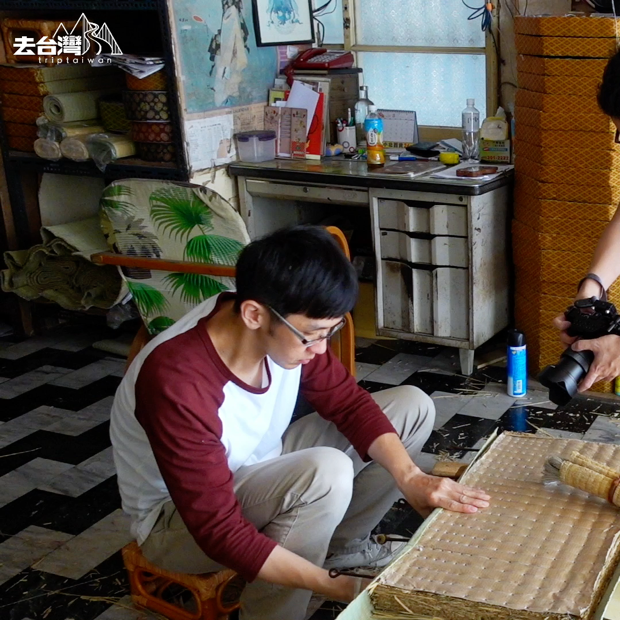 Ⓤ  Min-zhang Tatami Mat  Bring one tatami mat home with you, the inheritance of Japanese workmanship

Tainan was the first modern city in Taiwan. Since it received lots of influences during the Japanese Occupation Era, apart from keeping lots of Japanese style architecture, the people also kept lots of Japanese living style. Min-zhang Tatami Mat shop is currently run by the third generation of the family.  We asked the present owner Mr. Hung: “How did your grandfather know how to make a tatami mat?” in which he replied: “It was all taught by the Japanese tatami craft master who came to live in Taiwan.” A whole piece of tatami mat, which can be used for more than a dozen years, is made stitch by stich using rush imported from Japan with the rice straw produced in Yunlin County. We recommend you to buy a small tatami mat as a souvenir. 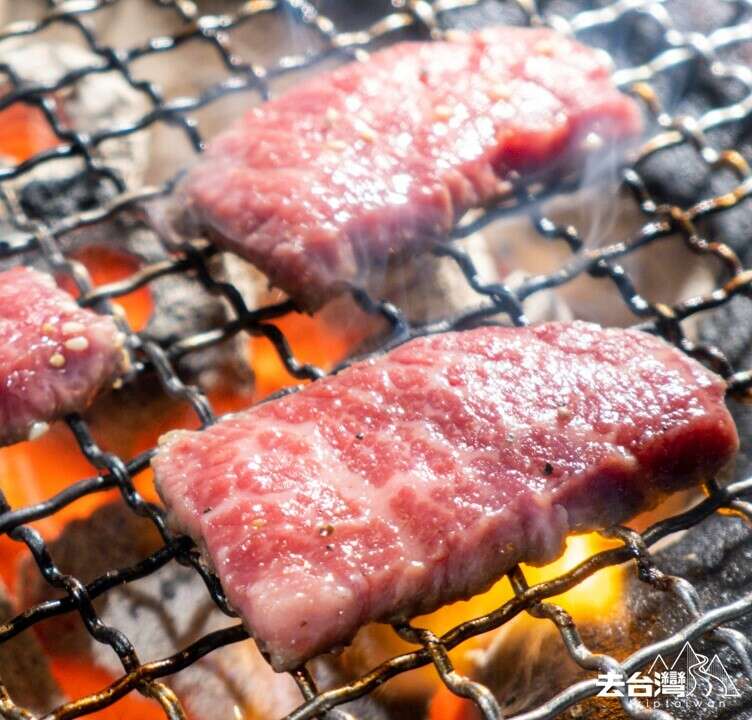 It is a bit expense to have Japanese style BBQ in HK, but since the owner of the this BBQ was the buyer of the famous BBQ restaurant “Kanpai,” who knew where to acquire good quality meat. They serve beef’s tongue with thin slices and thick slices, and the Taiwan style assorted beef plant presenting beef briskets, rib finger and flank meat; pork intestine, chicken tendon, water bamboo shoot and Neritic Squid are must-order items. They have 2 branch restaurants. The first one is in the East Dist., with decoration of red hot burning charcoal in front of the entrance. Although it is not spacious, but it is nice to dine in. The new Anping store is with larger space, which is suitable for a few friends gathering or for a whole family to come dining. 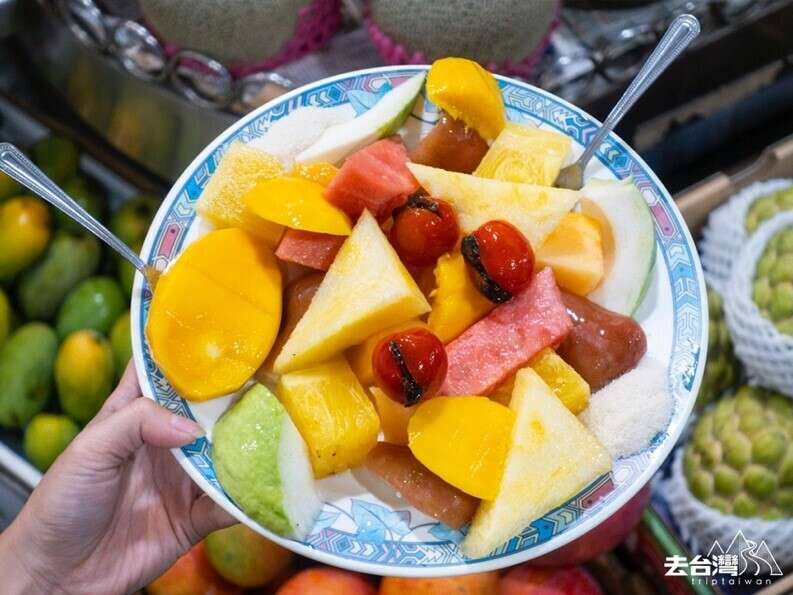 I am completely aware of how popular Lily Fruits Shop is and their fruits ice is very delicious. However, the locals don’t like to wait in line in front of a too popular and crowdy shop. Therefore, I would like to recommend a “Ching-G Fruits,” which is very close to the ”You-ai Street Hotel” you are staying at, with a walking distance of only approximately 1 or 2 minutes. Moreover, this is also a place where locals like to get together. Ask for a plate of assorted fruits (NT$200 ／HK$50) as desert after meal, you will be amazed by the seasonal fruits! In June, they will give you Ai-Wen Mango, sugar apple, all of which are not easily accessible in HK. Cherry tomato with preserved fruits in the slit, fine plum power at the side of the dish, the assorted fruits plate can be a special and perfect end for your little trip to Tainan.